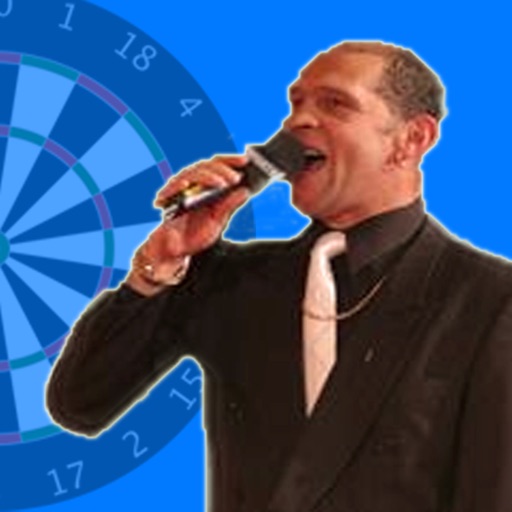 ***** 5 star award in Apps Magazine. "Russ Bray will speak your name and work out the scores for you, and there are so many features here we cannot possibly cover them all. It is a brilliant and ambitious darts scoring solution in app form".

One hundred and eighty! Welcome to the official app from the 'Voice of Darts' Russ Bray. Russ is a world famous darts referee who has been scoring major professional Sky TV tournaments for 20 years.

In the app Russ referees your darts match in full including speaking your name, throws, total left, and shot-outs with his silky vocal tones exactly as he does on TV - you'll think you're at the Ally Pally!

As well as two player and Cricket scoring you can also improve your game by playing virtual matches against the computer (01 games) at ten different skill levels. If you can beat the computer at level 10 you are ready to take on the world number one!

All players have their own profile including a photo which can be shown during play. Every match is recorded with detailed stats including average, first 9 average, best leg (darts thrown), highest checkout, highest throw, doubles hit and score table (60's, 100's, 140's and 180's counts).

Get the best selling darts scorer for a fraction of the cost of a standalone product!

Features include...
- 2 Player.
- Play the computer practice mode (01 games).
- Cricket scoring.
- Personalised audio, hear Russ speak YOUR name (over 3000 names including player nicknames).
- Audio calling the same as on TV.
- Player profiles including photos, handicaps and audio name which can be changed at any time.
- Full match history.
- Detailed stats for the current match and all past matches including average, first 9 average, best leg (darts thrown), highest checkout, highest throw, doubles hit and score table (60's, 100's, 140's and 180's counts).
- Choose between scoring the full three dart total or each dart individually.
- Set your own custom start number between 101 and 9999.
- Play with handicaps.
- Play with double to start (including play the computer). This is the format for the PDC World Grand Prix and also popular in local leagues.
- Play with leg or set scoring (3 or 5 leg sets).
- Select starting player.
- 10 computer levels.
- Last 4 scores shown in 3 dart mode.
- Number of darts thrown in current leg.
- Checkouts displayed when a finish is available.
- Share match scores on social media.
- Email and print match scores.
- Full undo and redo for the current leg.
- Music plays alongside Russ calling your match.
- iPad landscape support.

Note: We want you to enjoy the app and get the most from it. If you have any issues or comments use the support link from within the app or via iTunes and we will get attempt back to you within 24 hours.
[説明文を全て見る]